For fucking months, Georgia was reporting that ChinCOVID deaths peaked mid-April. That number was 57, then 58, and finally stabilized at 59 about a month and a half ago, as reports came in.

But suddenly, as of July 28, the default graph looks like this.

April 20: 78 deaths. The peak appears to be May 21 at 90 deaths. And the averaged curve appears to have been flattish but dropping slightly, and is now rising with a new secondary peak of 82 daily deaths in late July.

Nope. For some scientifically useless, but panic-inducing PR convenient reason, that default graph is of the date deaths were reported to DPH, not the day the death actually occurred. You have to look for the “date of death” graph.”

And looky there; a peak of 59 on April 16. A downward trend ever since, with an uptick in early July as the state has gone crazy classifying ever-lovin’ everything as COVID. Die from surgical complications? ChinCOVID (useful for doctors who want to avoid malpractice lawsuits). Smeared by a Mack truck? COVID; apparently those viruses are bigger than we thought.

Now look at this graph of daily cases (allegedly of the date occurred, not reported). 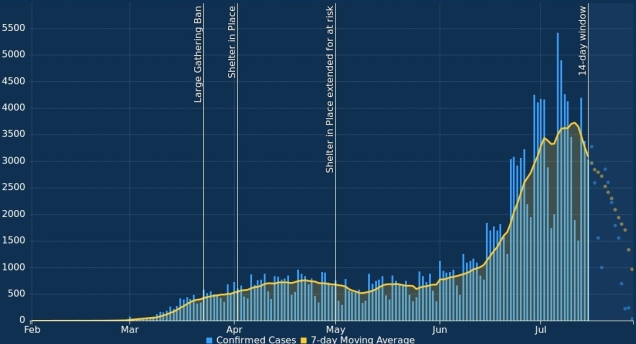 On the one hand, that looks like an out of control epidemic. On the other hand, that many cases means the Infection Mortality Rate (IFR; cases up, deaths down) is a lot lower than sociopathic panicmongers like Fauci claimed would be the case.

On the gripping hand, it means nothing but that I was right in claiming ChinCOVID was widespread long before officials recognized it, and was far less lethal (for all but the most vulnerable) than claimed. Let me tell you what that graph really shows:

Tests. During the April case peak, Georgia was doing 2,000 to 2,500 tests per day, and you already had to be symptomatic to get one. You had to make an appointment. And pay.

Of course they’re now seeing all the asymptomatic cases I told you were out there as far back as MARCH.

Allow me to make another successful prediction: In a couple of weeks, Georgia will see another surge of approximately 33% in daily reported cases. And the IFR will continue to drop.

Not let me tell what that prediction is based upon.

1. ChinCOVID is as common — and about as lethal — as any other common cold.
2. Georgia just let a new contract with a testing lab to boost daily tests by at least 10,000 per day… or roughly a 33% increase. More testing, more cases.

The “surge” could be even higher, because that many tests per day suggests they’ll be using the automated fast test machines with a high false-positive rate.