For a freaking year after we have a ChinCOIVID vaccine.

“I think it’s going to be a combination of a vaccine that has been around for almost a year and good public-health measures,” Fauci answered.

Per Worldometer (which seems to use the same source data as Johns Hopkins), this is what the US’ new daily cases looks like.

Steadily declining since July 24. A month and a half. Without a vaccine.

In fact, that graph seems to be based on date of report, not date of ChinCOVID onset (when someone shows symptoms or tests positive). I think that because this is the daily new cases graph for Georgia (which I’ve been tracking).

Problem is, that’s the bureaucratic “date of report” graph, which is when the hospitals and labs got around to forwarding results to DPH. Sometimes that can take over a month (5 months for a lab in Florida). It’s useless for analyzing an epidemic. We need date of onset, which Georgia has (but does not show by default for some stupid reason). 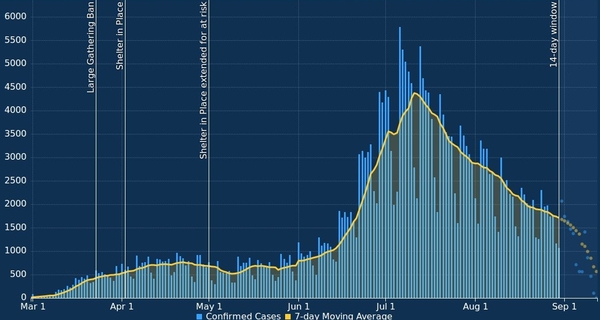 Peak day for when cases actually occurred or tested positive is July 6th. That’s 18 days earlier. We’ve been steadily declining for well over two months. Without a vaccine.

In my county, new cases by onset have been declining for two months, as well. We haven’t had a single new case reported for days (but that is preliminary data since as mentioned reporting can take weeks). We haven’t had a ChinCOVID death for a month. And let me tell you, around here almost no one wears a mask unless they’re going into a facility that requires them; it’s too damned hot. Only two places I’ve gone to require masks.

The exceptions actually wearing masks voluntarily are usually rather old, frail in appearance, or clearly have co-morbidities beginning with gross obesity. Those folks should wear masks.

Digression (that isn’t really): Take a look at all those graphs again. Look at the curves carefully, and try to find the case surges for schools and businesses reopening. They aren’t there. They didn’t happen.

Shutdowns were not needed, and reopening wasn’t dangerous.

Right now, our little ChinCOVID epidemic is following the classic epidemiolgical curve. And we are near the end. Without a vaccine.

With the epidemic almost over — without a vaccine — with no case surges with reopening, Qk. Fauci thinks we need to wait for the world record-shattering very first successful coronavirus vaccine (any strain), and then wait another fucking year before we let theaters reopen.

That’s beyond just pushing a police-statist agenda. That’s full on crazy, and the guy should locked away and medicated.