So sayeth the Eleventh Circuit Court of Appeals.

Because we find no violation of a clearly established right, we need not reach the other qualified immunity question of whether a constitutional violation occurred in the first place.

That’s the money quote. But let me tell you what it is in reference to. END_OF_DOCUMENT_TOKEN_TO_BE_REPLACED

…that this is parody.

No one with the real City of Saint Louis has a sense of humor. 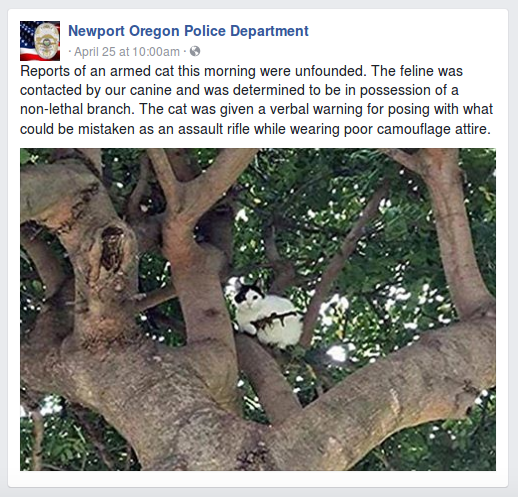 The heck with the rifle. Those things are sharp and pointy on five out of six corners.

It isn’t the sort of “wiggle room” they would have you think.

Police Warning Shots May Be In For A Comeback
Last fall, the International Association of Chiefs of Police and 10 other law enforcement groups got together to work out a consensus policy on the use of force — a sort of model document for local departments that want to update their rules. When the document came out in January, it contained a surprise: It allowed for warning shots.
[…
But Cunningham says the motivation for the change is to give officers a little more wiggle room when faced with a threat.

“I didn’t miss; those were just 47 warning shots.”

[Tulsa Officer Betty Shelby] first saw Crutcher’s tan SUV, which was parked in the middle of a two-lane roadway with the windows down. As she was peering inside the car, she turned around and saw Crutcher approaching her.

Oddly, the video shows her near the police car, not the SUV, with Crutcher between it and his SUV. 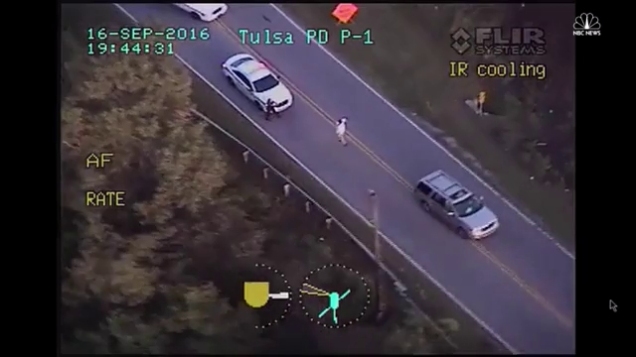 Then, Crutcher put his hands up, without receiving instructions to do so, which she thought was strange, Wood said.

The last time the cops came up on me from behind like I certainly raised my hands. Since the video appears to show her pointing her sidearm at him, I’m not surprised he raised his hands.

She believed he was reaching into the car to retrieve a weapon.

Through that “open window?” 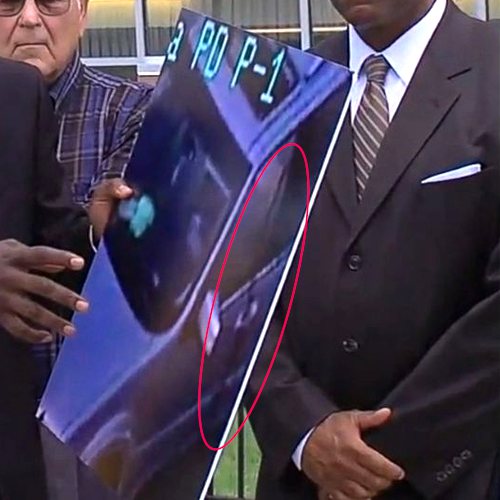 For now, assuming no photoshopping, that does appear to show a closed window. Note the reflection, as well as the dark streak extending down the window and continuing down the door. If it can be shown that the image the family displayed has been faked, I’ll revisit my opinion. Nota bene: My image here is a crop of a video still of the displayed image; I did enhance brightness and contrast and added the colored oval. I did not other alter the image.

If I were in Oklahoma, I would now be ineligible for jury duty for any trial related to this. If the lawyer’s assertion of his client’s claims are correct, then she lied about 1) her position, 2) that Crutcher walked up on her, 3) that he raised his hands for no reason, 4) that the window was open, and 5) that he reached into the “open” window.

Viewing the videos show no rational reason to shoot the man. Five statements directly contradicted by the videos, suggest…

Well, I’ll let you decided what the combination of shooting and lying about it suggests.

I’m going to give him benefit of the doubt and assume that he broke rule 2 along with the others.

San Francisco Sheriff’s Deputy Accidentally Discharges ‘Baby Glock’ Inside Hall of Justice
Sources told NBC Bay Area that Gaines brought the handgun, a 22-caliber “baby” Glock, to work and was apparently not familiar with how it operated. She handed it to Santos and asked him about its use, sources said. The second deputy pointed the weapon at the first deputy and – apparently unaware the weapon was loaded – pulled the trigger. The round missed the her, piercing an equipment storage cabinet, before lodging in the office wall.

Taking that at face value…

That wasn’t an “accidental” discharge. It wasn’t even negligent. He meant to point the gun at a person and pull the trigger. Thank Ghu he demonstrated standard NYPD-style LEO marksmanship.

A “22-caliber ‘baby’ Glock”? Aside from the missing decimal point, what the hell does that mean? I’m not a Glock guy, but isn’t the model 26 (9mm) the one that gets called a baby Glock? If it’s a Glock 22, they’ve got the caliber wrong (I once had a cop come in the store trying to buy “22 bullets” for his “law enforcement gun;” he had a Glock 22 and had no ideqa what ammo it ate, he just put in preloaded mags from the department armory). Huh. Maybe it had the .22 conversion kit.

1. The cops dragoon unsuspecting civilians into a live-fire “training exercise.”

Trooper Severely Injured, Gunman Dead in Shooting at Greyhound Station in Richmond, Virginia
Officials said the shooting happened near the end of a counter-drug training mission for state police. Part of the training involves approaching civilians and talking to them.

When a state trooper walked up to one man at the bus station, the man pulled a gun and shot the officer at close range, officials said. The officer has since died and the gunman is also dead.

Reports are varied as to number of wounded and dead, and even the suspect’s condition (even the above article has changed while I type). But the “training exercise” appears uniformly. So there’s no real information on little things like motive. But…

WTF are the cops doing running a “training exercise” in a working bus station filled with civilians who don’t know they’re participating? And why would the cops be using live ammo for an exercise with civilians?

I really want to see some surveillance cam footage of how those cops “approached” the shooter, along with what they were wearing.

Updated speculation: As you can see above (and from various stories), originally it wasn’t specified that the officer who was shot was in uniform. The confusion over who was shot (two officers and a female civilian and the shooter, then two officers and two civilians, then one officer and two civilians…) made me wonder if they had trouble sorting cops and civilians because the officers were in plainclothes. That could be significant in figuring out the shooter’s motivation; was he concerned about a pushy guy in civvies trying to grill him? Or did he have some reason to fear arrest?

NBC has now updated their article to indicate that the “state trooper in uniform walked up to one man”. That would appear to indicate the guy knew it was a cop. But…

Then I read this: “[Virginia State Police spokeswoman Corinne] Geller added that the shooter approached the trooper, who was dressed in an “identifiable” outfit before they had a conversation and the man drew a gun and opened fire.”

An “identifiable outfit”? Why not just say uniform. Odd phrasing, that. Now I really want to see surveillance footage. Was the cop in plainclothes except for a raid jacket with “Police” across the back?

And who approached whom?

Officer Has ND In Store While Trying On Concealed Carry Shirt
According to the Warren Times Observer, the officer was attempting to see how his concealed carry pistol would fit in the shirt. During this time, it’s believed that his finger managed to drop by the trigger, causing a round to penetrate through the shirt and into the bench. The officer then abandoned the items in the dressing room and fled the scene. Police have charged him with reckless endangerment and criminal mischief.

Am I the only person who unloads guns before testing them in a new holster?

Man ambushes, tries to “execute” cop in Philadelphia
Jim Kenney, who is in his first week as mayor of the nation’s fifth largest city, said, “There are just too many guns on the streets and I think our national government needs to do something about that.”

…who let their guns get stolen.