Emma “Ripley” Gonzalez, as expected, is dancing in the Tennessee Waffle House victims’ blood to…

“Removing the assault and semi-automatic weapons from our Civilian society, instituting thorough background checks and mandatory waiting periods (and raising the buying age and banning the production of high-capacity magazines) are the ways to stop shootings in America. >

She also notes that James Shaw Jr. managed to stop the shooter without a gun of his own, proving that teachers don’t need guns. Yeah, and he got shot. Come to think of it, so did unarmed faculty at her high school. Go figure.

You know who didn’t get shot? The AR-armed man who stopped the Sutherland Springs shooter. Go figure that, too. And I wonder why cops bother with those “unnecessary” guns.

The chumbucket may also have been under indictment for his informal White House tour last year, which make him a prohibited person… ummm, just like the Parkland shooter (according to FL DCF), not to mention the aforementioned Sutherland Springs killer … so in Ripley’s pink unicorn world, he shouldn’t have been able to get guns at all.

Funny how criminals keep doing that.

ETA: I thought the shooter might be under indictment from the White House escapade, but it looks like that case was cleared. He had also been taken in for involuntary psych evaluation at one point; I don’t know if that included an adjudication of mental illness that would make him a prohibited person.

You made a left turn at Havana. You need to turn around and head south for about 265 miles.

..or does anyone else think David and Emma need to swap testosterone and estrogen prescriptions? 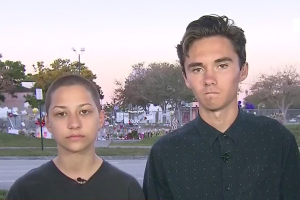 Law enforcement failed 42 times to do anything about the Marjory Stoneman Douglas High School murderer. The school failed to do anything about him. DCF failed, despite an apparent adjudication of mental incompetence. In turn, someone in government neglected to report him to NICS, so he was able to buy a gun from an FFL.

The Coward County Sheriff’s Office ignored an impassioned plea from a family member. (Several, really, including one from the suspect himself.)

Coward County Sheriff’s deputies… cowered outside, and let the shooter kill. (Peterson now claims that he heard shots, but thought they came from outside, therefore he hid… outside. Ignoring screaming kids pouring out of the building.)

The rifle. And every honest gun owner in the country who didn’t commit the crime.

There are an estimated 16,000,000 AR-pattern rifles alone in America. The Parkland shooter used one of those, which government should have prevented him having in the first place.

Your shooter used one.

You want “assault weapons” banned. Yet you have no constitutionally specific definition of such. As a result honest gun owners reasonably wonder if you plan to take them all.

Your shooter was one PROHIBITED PERSON.

But you blame all gun owners — whom, I repeat, didn’t do it — for the criminal acts of one prohibited person whom the government allowed to kill. You negligently throw out the term “NRA” as shorthand for all gun owners and accuse us of murder, which sounds like slander/libel to me.

As many as 120,000,000 honest people armed with as much as 750,000,000 small arms are watching you accuse and threaten us; watching you attempt to sic the forces of government on us for crimes we did not commit, in a mass 18 U.S. Code § 241 conspiracy against constitutionally-protected human/civil rights.*

“Forces of government” seemingly too incompetent to stop one crazed killer.

Is it wise to piss off that many armed people with only the Browardly backing of government?

Some people need to put down the smart phone and face reality.

A gentle reminder that all we are aiming for here is stricter gun laws that make it harder for people to get guns (because it shouldn’t be easier than getting a drivers license) and the removal of Military Grade Weapons from Civilian Society. #BanAssaultRifles #GunContolNow

Why, bless your heart.

I’ll take that one by one.

Are you stupid, or an outright liar, buzzcut?

Have you considered blaming the lunatic who shot up your school, who lied on his 4473? The Sheriff who admit admits his agency took 23 calls on chumbucket, and only handled 16 of them “correctly” even by his apparently nonexistent standards? The state and local agencies that blew off a total of 42 pre-shooting calls on chumbucket, including one from the perp himself? The FBI which admits to ignoring 2 very specific warnings by name?

Have you considered blaming whoever was responsible for reporting to NICS that bucketboy had been adjudicated a “vulnerable adult die to mental illness,” meaning he was a prohibited person, and should have failed his multiple background checks?

Have you considered blaming the four deputies who refused to enter and face a shooter, demonstrating tinier testicles than your unarmed coach?

And who do you blame for your own ignorant call for the violation of human/civil rights?

If anyone is on Twitter, or has this snowflake’s email address, please forward these questions to her. I’d really like to see her answers. She can reply by the same route, or post a comment here.