Ana Navarro Destroy’s Trump’s Secretary of State Brouhaha With Single Tweet
“Let’s stop obsessing over who’ll be Secretary of State. We don’t need one. Our Twitterer-in-Chief can set foreign policy in 140 characters”

But I thought it was fine when Obama did it.

Not to mention a certain Secretary of State.

Now I understand why Barrycade decided to visit Louisiana after all, massively impeding rescue and recovery efforts.

Someone told him about the challenging course with huge water hazards. 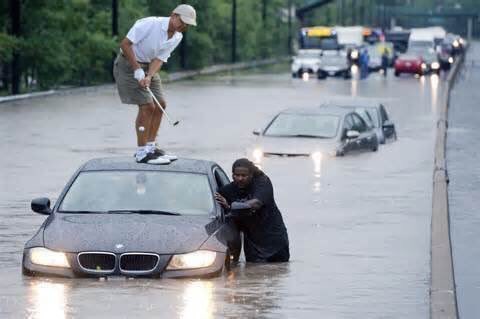 Top of the page on the Drudge Report today.

I just watched Barrycade at a press conference on the UK leg of his tour. Telling them what to do on the Brexit vote, threatening trade treaties, rubbing their noses in the fact that he sent the UK’s gift of the Churchill bust back…

On the bright side, maybe the Brits will burn down the White House again.

I can hardly wait to hear what he tells the Germans about immigration, or the Saudis about Islam.

If he gets to Japan, he’ll probably hand out commemorative glow-in-the-dark mushroom cloud toys.

Hat tip to Never yet Melted.

Will Obama Pick Himself For High Court?
One name I have not seen on any of these lists, but which has been mentioned as a possible pick for Hillary, is that of Barack Obama himself. There is nothing in the Constitution to prevent a president from appointing himself to the Supreme Court. Of course, he would have to get Senate approval, and the idea of Joe Biden stepping up to the presidency, even for a very short time, would play in, but it’s not beyond possibility, especially if his first pick were to be stymied.

And if he appointed himself with the Senate in recess, they’d have to impeach him or he’d be there until the end of the session.

I sort of hope he does it. “Chief Justice of the Supreme Court Barack Hussein Obama.” It just rolls of the tongue like spewing vomit.

President Constitutional Law Professor has a post at SCOTUSblog on what he’s looking for in a SCOTUS nominee.

A Responsibility I Take Seriously
A sterling record. A deep respect for the judiciary’s role. An understanding of the way the world really works. That’s what I’m considering as I fulfill my constitutional duty to appoint a judge to our highest court.

Eveyone is in a tizzy over Obama not attending Scalia’s funeral, with some suggesting that it conflicted with a golf date.

I suspect he’s simply incapable of crossing the threshold of the Basilica of the National Shrine of the Immaculate Conception.

So far, it’s been “poor Gabby,” lies (no other developed nation had the US’ level of gun violence, 90% percent of Americans want universal-preemptively-prove-your-innocence, the vast majority of gun owner want more restrictions), bogus “study” on felons buying guns online, …

It isn’t much, but that graphic is in the public domain. Post it everywhere, resize it, put on pin-back badges, sell ’em at gun shows. Whatever you want.

None of the anticipated RKBA-violating EOs have dropped yet (scheduled for 11:40 AM), but thing are starting to move.

Politicians are promising legislation to stop Obama’s unlawful acts, without explaining why — since they’re unlawful — they need more laws. Gun groups are threatening lawsuits; too bad too damned many courts up to the SCROTUM (Chief Justice Vidkun Roberts) are friendly towards the administration’s unconstitutional moves.

It will be more effective to address this at the grassroots level.

President Dumbass is on TV, telling the nation how great COP21 is, but that it will only go part of the way towards eliminating carbon dioxide from the atmosphere altogether.

I wish he’d do his part.

Just doing their bit to keep CO2 out of the atmosphere.