Updates: I’ll be adding stuff here as I find it.

Looks like a Trump supporter, maybe a registered Republican.

Does seem to be Republican.

Though this claims Democrat.

As a felon, how is he registered to vote? Were his rights restored by Scott? This hasn’t passed yet. 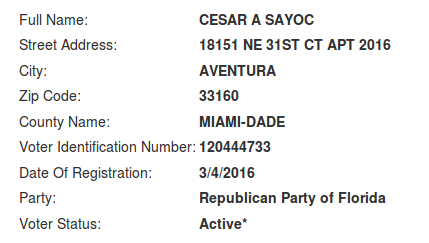 But he had a felony bust 1/27/2015. How did he manage to get clemency from Gov. Scott 13 months later? Did he get clemency, or is the registration invalid?

I’ve emailed the FL Gov’s office to ask about that.

Another oddity regarding voter registration. Per this report:

But an attorney representing Sayoc’s family said he has not visited his mom’s condo in Aventura for at least three years.

His hasn’t visited his mother, much less lived there since at least October 2015. But he appears to have used that address to register in March 2016.

And I still wonder about that seemingly rather new van. A homeless guy with thousands in debts could afford it? Those “stickers” plastered on appear to actually be printed poster collages (as best I can make out from available images). Those aren’t cheap either.

Can anyone tell the make/model/year of the van, or verify what I think I see as posters?

There appears to be some confusion about Sayoc being a convicted felon:

“The case, however, did not make Sayoc a convicted felon or bar him from voting. He received a “withhold of adjudication,” which means the case did not technically count as a felony conviction.”

That refers to a 2014 deposition in which the the 2002 FP&L bomb threat case was brought up. The 2002 bomb threat did not result in a felony conviction. I’m talking about his 2014 felony grand theft conviction, which was the sentence still being served when he was again arrested (on felony charges) for probation violation. I don’t know the status of the 2015 charges, but the 2014 conviction remains.

Patronize Me [grin]
My Patreon Page